Any biology students out there? Do you remember the moth that changed colour from white to black as a result of the first industrial revolution in Northern England?

Well, here’s the story, just in case. The Peppered Moth (once a pale grey), began to change to dark grey/black as the forests became increasingly polluted by coal soot during the first industrial revolution. The black moths were better able to camouflage themselves on sooty tree trunks while their pale friends were eaten by birds.

Why is this relevant? Because you need to ask yourself: Am I a pale grey moth or am I willing to become a black moth?

The fourth industrial revolution can be hard to get your head around. After all, it’s a little more Star Trek than the previous ones.

Let’s recap: the first industrial revolution was the shift from handmade products to factory manufacturing, especially in textiles and iron, driven by the invention of the coal-fired steam engine. This also led to the birth of railroads.

The second industrial revolution was all about electricity, petroleum and steel. Humanity welcomed the automobile, electric lights, and the telephone, as well as civic water supplies and sewerage in many Western cities.

The third industrial revolution was the digital boom that started in the 1980s with the introduction of the personal computer, followed by the Internet. We are still in the midst of this which is why many people will think, ‘Huh? Fourth revolution? Aren’t we getting a little ahead of ourselves?’

The answer is no. As artificial intelligence, robotics, autonomous vehicles, 3D printing and the Internet of Things become increasingly commonplace, humans need to accept that machines are now communicating directly with other machines without the need for human involvement or intervention.

Isn’t this a little creepy? Are robots going to take over the world?

Robots – or at least the level of artificial intelligence implied by the term – are going to make the world a better place.

Take Tesla’s driverless truck. It’s the most aerodynamic, energy efficient and safe truck that has ever been designed and it was launched on November 16 this year. In the same way that autopilot made air travel safer, the Tesla driverless truck will do the same for land-based freight logistics.

IKEA is about to introduce 3D in-store printing of some of its products, a move that will dramatically reduce the companies’ environmental footprint, while drastically increasing its capacity for customisation.

Australian companies like Dematic have developed manufacturing lines where the nanotechnology inside a sticker communicates directly with each stage of the production line to tell the machines what ingredients need to go into each container, what processes it needs to go through, and what label to put on it at the end. The efficiency and accuracy implications of this are significant.

SO, WHAT DOES THIS MEAN FOR THE TRAVEL INDUSTRY?

Tammy Marshall, founder of The B Hive, says in her recent Collaboration White Paper, “Many of the effects of the Fourth Industrial Revolution are being seen more and more – while some may still be stuck in the ‘this is too hard’ mindset, many are realising the opportunities that are widely available to those that are willing to approach business differently.

“There are broadly two driving forces behind this new normal. Firstly, the ability to offer customers a much more connected and seamless experience, one which they are expecting, and chances are, getting elsewhere; and the rapid growth of new and different digital platforms that continue to shake up the travel sector and disrupt the value chain pre, during and post travel,” said Marshall. 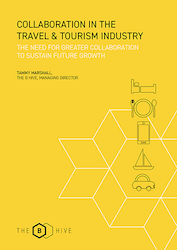 WHAT DOES THIS MEAN FOR TRAVELLERS?

For starters, a ridiculous level of personalisation. At Disney amusement parks, visitors are given MyMagic+ wristbands to wear that allows a system to collect individual data so that upon that customer’s return, the park will tailor the experience to that person’s preferences.

On Air New Zealand flights, cabin crews not only use VR to welcome passengers on board, but they also know what wine they prefer based on data that has been collected, pre-flight.

Increased levels of service are key. From the Artificial Intelligence ‘bot’ that answers your questions in a Facebook chat session, to the data that a hotel loyalty program uses to stock your mini-bar with your favourite items, the overall result is one of a highly tailored, personalised experience.

The question, then, is will you adapt to this new paradigm? What are you doing to embrace these new technologies?

Will you become a black moth or will you get eaten?